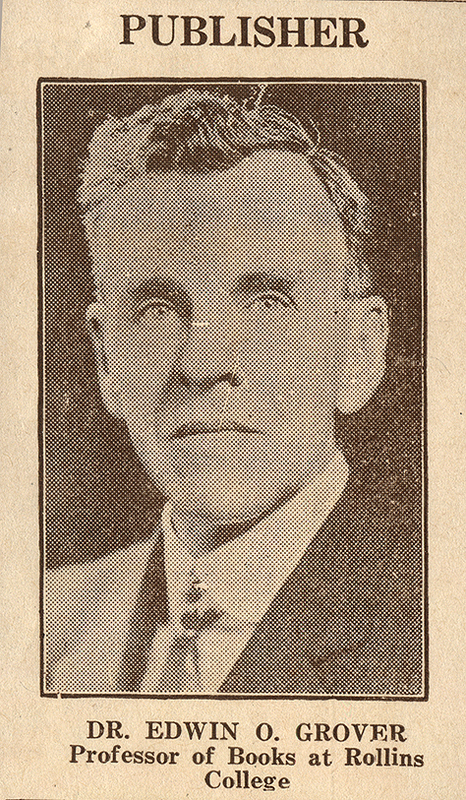 Although Edwin Osgood Grover was born in Minnesota on June 4th, 1870, his family relocated to New England shortly after his birth. His father, a Congregational minister, accepted a position as a pastor there. He graduated from St. Johnsbury Academy in Vermont and later attended Dartmouth College, graduating in 1894.

Grover seemed destined to be involved in books in one manner or another. He started his career working for Ginn & Company of Boston, publishers of children's readers, primers and text books. He then moved on the Rand McNally in Chicago . . . until he started his own enterprise, the Prang Company. Then, in 1926, he was summoned to Rollins College by then college president, Hamilton Holt. Holt himself had only arrived in Winter Park in 1925, but he decided early on to create the position of "Professor of Books" . . . and he offered this appointment to Edwin Osgood Grover. Grover taught numerous courses in reading and literature. Throughout the years, Grover held many positions at Rollins. In 1927, President Holt created The Animated Magazine, a magazine that featured the contributors presenting their pieces - live and in person. Grover was at Holt's side, serving as the publisher for this new venture. The concept was quite popular, as each year throngs of people would come "see and hear" the magazine.

Grover retired from Rollins College after 21 years of service. He went on to start his own publishing company, The Angel Alley Press. The company was best known for publishing books of poetry, including collections of poems written by Rollins' students.

Though retired, Grover continued to work for the good of the entire Winter Park community. He was active in his church, and, with his wife, Mertie, created a day nursery for busy working mothers. After his wife's untimely death in 1936, he requested that in lieu of flowers, gifts of money be given for the creation of the Hannibal Square Library, which was officially named Hannibal Square Public Library-Mertie Graham Grover Memorial. It opened on July 1, 1937. Both he and his wife strove to improve the lives of the residents of Winter Park's West Side, the historical home of the African-American community. Grover was also instrumental in acquiring the land for the creation of Mead Gardens.

Grover's family consisted of his wife, Mertie, and his children: daughters Frances and Hester, and one son, Graham. Mertie Graham Grover was struck by an automobile in 1936 and died a few days later from the injuries sustained in that accident. His son, Graham was killed in a train accident on Minnesota Avenue in 1940. His sister, Eulalie Osgood Grover, was the beloved author of the children's books, The Sunbonnet Babies series and the Overall Boys series.