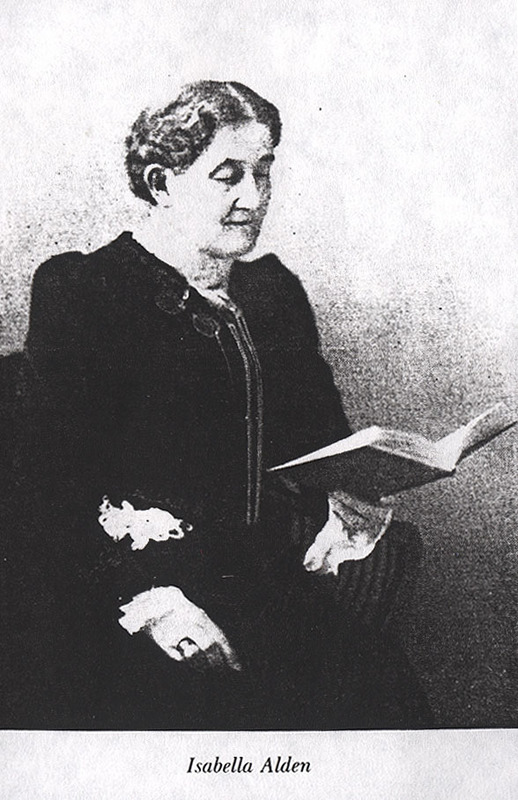 Isabelle MacDonald was born in Rochester, New York on November 3, 1841. Her famous nickname of “Pansy” came early on her life. As the story goes, the name was first used by her father, for when she was a small girl she picked every pansy in their flower garden . . . all in a child’s effort to help decorate a dining table, as her mother was planning a tea party and she wanted it to look pretty for her mother’s friends.
She began writing as a child and her first story was published by a local paper. In order to remain anonymous and retain privacy, she went by the name of Pansy. Her first published book, in fact, won a prize. Over the years she wrote books and articles, edited magazines, and did public-speaking on the Chautauqua circuit.
In May of 1866 she married Gustav Rosenberg Alden, a Presbyterian minister. On March 1, 1873, their son, Raymond MacDonald Alden, was born to the couple in Utica, New York. Because of the child’s ill health, the family moved to Winter Park in1886 when the town was in its infancy.
Gustav had a home built for his small family. It was known as the Pansy Cottage and was located on the northeast corner of Lyman and Interlachen Avenue.
Isabelle became a popular and prolific author of children’s books. She authored or edited over 200 books during her life-time. Most of these books were Christian in nature. In fact, her own words reflect her reason for writing,” I dedicate my pen to the direct and continuous effort to win others for Christ and help others to closer fellowship with him.”
Over the years her husband became an invalid and Isabelle’s writing supported the family. Raymond attended Rollins Academy from 1886-1890. He then spent two years at Rollins College before transferring to the University of Pennsylvania from which he graduated in 1894.
Raymond went on to earn an MA from Harvard and his PhD from the University of Pennsylvania. He stayed on at University of PA as an instructor and then took a position at Stanford University. He was recognized as an authority on Shakespeare, Tennyson, and Thoreau.
Isabelle's husband died on March 29, 1924 and her son died soon after on September 29, 1924. Raymond was married and had five children and his family lived in Palo Alto, CA. So, after the deaths of the two men in her family, Isabelle moved to Palo Alto to live with her daughter-in-law and grandchildren.
Isabelle’s niece, Grace Livingston Hill, was also a prolific author. She wrote over 100 novels and was quite influenced by her aunt Isabelle. During interviews, Grace related many admirable aspects of Isabelle's personality and way-of-being. She stated that she was not only influenced by Isabelle's writing but by her very aura. Grace held Isabelle in the highest esteem. Grace Livingston Hill was also the first gym instructor at Rollins College and was later the director of the physical education program there.
Isabella “Pansy” Alden died in Palo Alto, CA on August 5, 1930 at the age of 89.