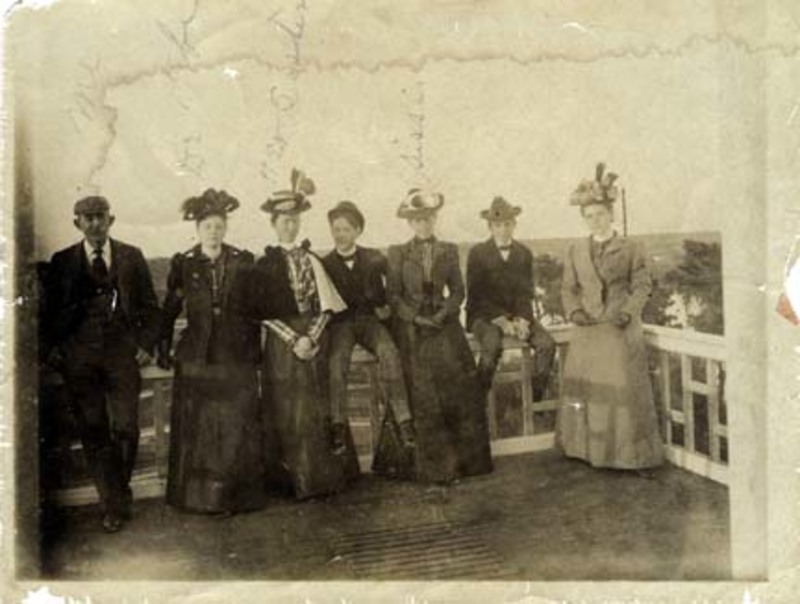 Dick Neal Batchelor (1843 - 1924), with his wife Mary and son DeHaven, came to Winter Park in 1883. He entered the citrus growing business, owning a grove in Winter Park and another one in Sorrento, in what is now Lake County. In 1885, after the death of his wife, Mr. Batchelor, together with his sister, Mrs. Mary Batchelor Bull, built the "Batchelor House," one of the earliest homes in Winter Park. It was built on the northeast corner of Osceola Avenue and Ollie Avenue in 1886. The property measured 191 feet along Osceola Avenue and ran 439 feet along Ollie Avenue to Lake Virginia, with a 140 front footage on the lake. The "Batchelor House" was a very popular boarding house as well as one of Winter Park's show places. It was a huge, two-story house with porches, gingerbread trim, and a turret.

D. N. Batchelor served as postmaster for Winter Park in the mid 1880's,as a member of the City Council, and was active in starting the City's beautification program which included planting oak trees along the streets of Winter Park. D. N. served his country during the Spanish American War. According to Clare MacDowell's Chronological History of Winter Park Florida, in 1898, "The Battleship Maine was blown up in Havana harbor. Ex-postmaster D. N. Batchelor was quartermaster in the army at Santiago". He had been in charge of General Shatter's army and had viewed the big fight July 3, when the Spanish Army fell at Santiago.

On June 10, 1926, while in the city park, D. N. Batchelor died of heart failure. Mr. Batchelor was 84 years old. He was survived by one son, De Haven Batchelor, one grandson, Richard Batchelor and two great grandsons, Richard and James Batchelor.

DeHaven Batchelor, son of D. N. and Mary Batchelor, was one of the group of students who matriculated at Rollins College on the first day it opened. After completing his education he started a bicycle repair business in Winter Park. An article in the "Chase Scrap Book", dated May 11, 1892, said; "De Batchelor breaks the world record in bicycling. He made a short distance at the rate of one mile in 16 seconds, the first time he ever rode". On October 20, 1897, DeHaven Batchelor married Louise Meriwether and they had one son, Richard. In 1908, DeHaven Batchelor had one of the three automobiles in Winter Park, a Cadillac. He later established an automobile garage in Orlando, and for many years was an agent for Cadillac cars.

DeHaven Batchelor was active in Winter Park's government. In 1898 & 1899 he was elected City Clerk and in 1902, he was appointed Tax Collector after the resignation of the elected tax collector. In 1906 he was elected Tax Collector, and from 1908 to 1912 he was again elected Clerk. He was also a charter member of The Board of Trade, which was the forerunner of the Winter Park Chamber of Commerce. DeHaven Batchelor died March 21, 1936.

Louise Meriwether Batchelor came to Winter Park in the early 1890's with her parents and two sisters, Elizabeth and Mary Christian. The family lived on Interlachen Avenue and according to an article from the Winter Park Herald dated June 10, 1926, "(Mary) Christian was a musician and the home quickly became a mecca for the young people of the town". Before and after her marriage to DeHaven, Louise was active in the community, her church, and the library. She was a charter member of the Woman's Club and its treasurer for five years. Louise Meriwether Batchelor died in 1959.

Five generations of the Batchelor family lived in the Batchelor House. In 1957, Rollins College leased the Batchelor House to serve as a temporary girls' dormitory. Mrs. De Haven Batchelor and her grandsons, Richard and James, owners of the house, granted the college the lease for one year with an option to renew. A new women's dormitory planned by Architect James Gamble Rogers II would be ready for occupancy in the fall of 1958.

Want to see the rest of the Batchellor Family Collection? Click the leaf below!