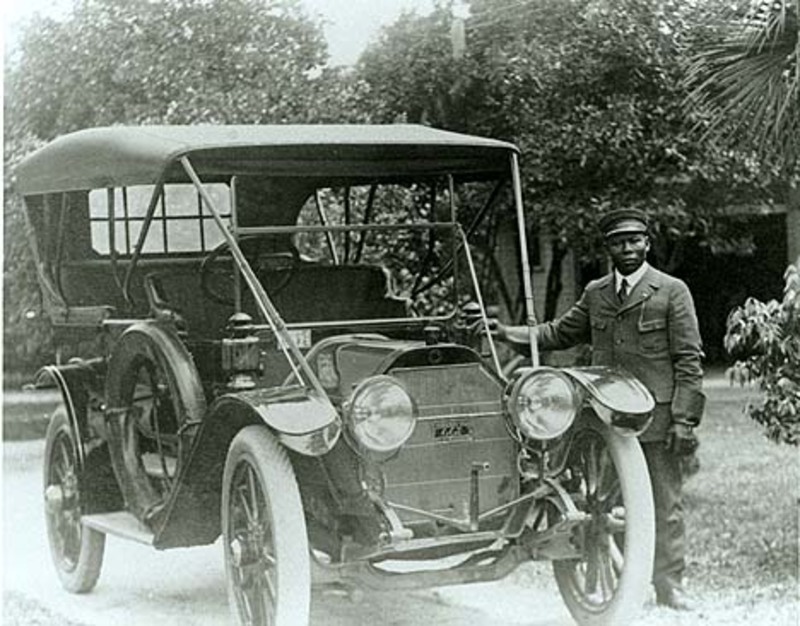 Larkin: chauffeur for the Spooner family in both Illinois & Winter Park

Larkin Franklin, a Mohawk Indian from Oklahoma, was born around 1880. He moved to the Chicago area and there became the chauffeur for the Spooner family.

Frank Spooner was one of the early settlers of Chicago, moving there in 1864 from Springfield, Massachusetts. He was the founder of the Chicago Union Lime Works and retired in 1893. He purchased a home in Winter Park in 1905. The house, built in 1883, was situated on the north shore of Lake Osceola and called "Weatogue" .

For about ten years, beginning in 1905, Larkin Franklin traveled back and forth with the Spooners to Winter Park. Mr. Spooner was a devout and financially generous member of the Congregational Church of Winter Park, and he cared deeply about preserving the natural beauty of the city. Franklin is pictured here with a "Buick touring car" from this time period.

Around 1924, Franklin married Effie Jackson, who was about 24 years old at the time. Jackson was a black woman born in Longwood. Her aunt worked for Mrs. Spooner; Effie went to work there as well, and she met Larkin Franklin. The two Jackson women were the housekeeper and cook for the family.

After marrying, Franklin took less-paying jobs, such as performing yard work. Together Larkin and Effie had six children. He died in 1946.