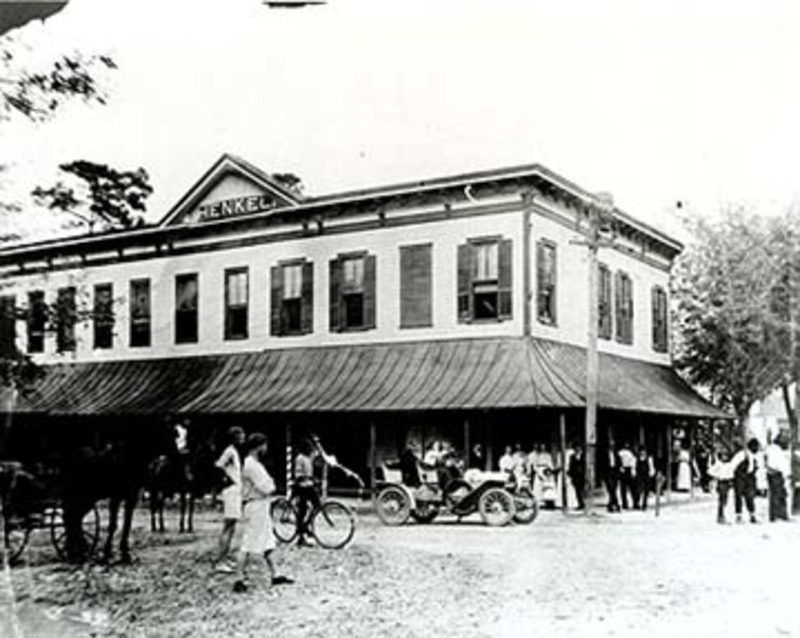 A beloved physician and his family

Dr. Miller Abraham Henkel came to Winter Park with his wife and children in 1884. He built his home on the banks of Lake Killarney, on what is now Orlando Avenue. In 1886, he built Henkel Block, which had the only stretch of sidewalk in Winter Park for many years. Henkel Block was located on the corner of New England and Park Avenue. The building contained five stores plus Dr. Henkel's medical office and a drug store. That same year his wife Fannie died of tuberculosis. Prior to moving to Winter Park the disease had taken his youngest daughter, and two more of his children would be lost to the disease in later years. These tragedies spurred Dr. Henkel to work toward finding a treatment for tuberculosis.

One of Winter Park's first physicians, Dr. Henkel served his patients for 50 cents an office visit, or as one sales receipt notes, "in exchange for vegetables." Dr. Henkel took an active interest in the city of Winter Park as well as its people. He served three terms as Mayor, and was a member of the Executive Committee of the Winter Park Village Improvement Association, which planted trees along the streets and in the parks. He was the Chairman of the Street Committee during which time he orchestrated the construction of the first clay road between Winter Park and Maitland. Dr. Henkel died in 1911, an honored member of his community and a revered leader. He was affectionately known as the "beloved physician."

Thomas M. Henkel, Dr. Henkel's son, also served this community. In 1912, he was elected mayor of Winter Park. He was elected alderman in 1910, 1915, and 1924. 1928 brought a change in the way the elections were held. Instead of holding a city caucus to nominate men for public office, primary elections were held. Thomas M. Henkel was elected that year as a city commissioner and would hold that office again in 1930. Perhaps his most enduring contribution to the city was the lot for the Town Hall and jail, which he donated in 1915. The current City Hall still stands on that lot.

Thomas Henkel, Jr., who donated much of the information on the history of his family to the Winter Park Public Library Archives, is the grandson of Dr. Miller Henkel. Bessie Galloway, daughter-in law of Dr. Henkel, is Thomas Henkel, Jr.'s mother. Bessie owned and operated two Winter Park businesses independently for many years. Due to the lack of public confidence in women's entrepreneurial abilities, Bessie G. Henkel, ran her insurance business as the sole-proprietor naming it B.D. Galloway Agency. Her business sustained her family through the depression. In 1994 Tom Henkel awarded an annual grant in his mother's name to the Business Studies program at Valencia Community College. This annual grant is called the Bessie Galloway Henkel Chair in Women's Studies in Business. Many members of the Henkel family and direct descendents of Dr. Miller Abraham Henkel still reside in Winter Park.