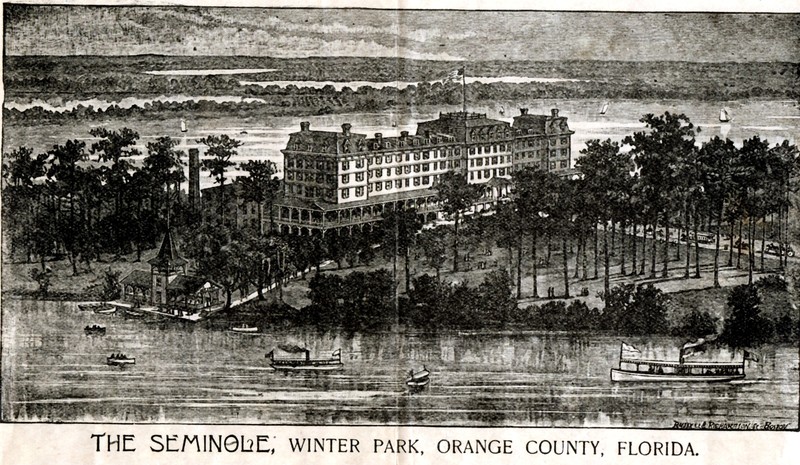 The Seminole Hotel opened on January 1st, 1886. With a number of investors, including Mr. Chase, The Winter Park Company constructed the first Seminole Hotel at the cost of $150,000. The hotel, completed and opened January 1, 1886, was the largest hotel south of Jacksonville, Florida. It was a "state of the art" hotel for its time with steam heat, gas lighting, an elevator, electric service bells, a fire alarm system, approved fire escape, hot and cold baths and a steam bath.
The hotel, which accommodated 400 guests across 200 rooms, was situated on a site bounded by Osceola Avenue and Lake Osceola and sat at the eastern end of New England Avenue. New England Avenue was carved out as one of Winter Park's earliest roads in order to build the Seminole Hotel.

At that time, wagons, carriages and bicycles were the only modes of local transportation. However, guests of the Seminole Hotel were treated to a mule and cart ride that sat on the same rails that were constructed to carry wood in order to build the hotel. Many of these passengers came to Winter Park in the winter months to escape the snow and frigid temperatures of the North!

The original Seminole Hotel burned to the ground in September, 1902. In 1912, a second Seminole Hotel was built which boasted a much smaller 82 rooms. The new hotel was located on East Webster Avenue and sat on the banks of Lake Osceola. This hotel was torn down in 1970. 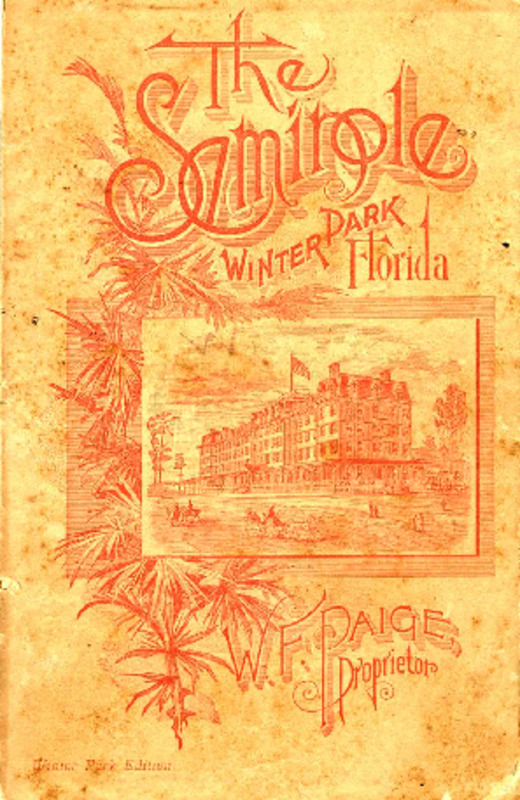 This is a promotional booklet for The (first) Seminole hotel. Not only does it describe the hotel in great detail, including a diagram and layout of each of the hotel's floors, but it also gives an early history of Winter Park with vintage photographs of the town.

A detailed account of the view from the top of The Seminole (page 25) is fascinating to read. The text describes a birds-eye view of the town of Winter Park, its lakes and its buildings before the turn of the century.

This booklet can be accurately dated by referencing the 1888-9 calendar for Rollins College on page 19.